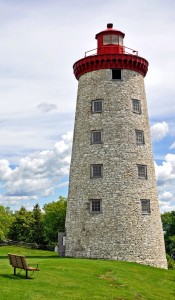 The Windmill Point lighthouse, as shown in the jigsaw puzzle, was originally a windmill where the “Battle of the Windmill” was fought. The battle is an important story in Canadian folklore. It was one of the most famous battles between Loyalist Upper Canadian government forces and insurgents in 1838.

The attack itself was launched from across the border in the United States, by disgruntled Canadians keen to see an end to British colonial rule. This group was known as the Hunter Patriots, and the windmill became an inadvertent landmark for their own demise. The group was infiltrated and the Loyalists were given ample time to defend against the attack. The Hunter Patriots were forced to defend from inside the windmill but were eventually routed by the colonial powers.

Nine years after the battle the windmill was converted into a lighthouse and remains a Canadian heritage site today.

See all jigsaw puzzles based on Dennis Jarvis's photographs.