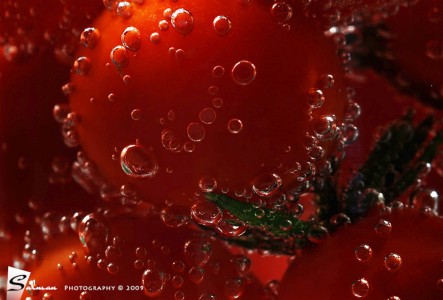 When tomatoes were introduced to Europe in the 1500s, members of the upper class soon shunned them as poisonous.  This was more than mere superstition.  Rich people who indulged in the luscious new food often did sicken and die, but the poor seemed curiously immune. As it turned out, tomatoes were not the real culprits, the pewter tableware was.  Tomatoes’ high acid content caused the lead used in eating utensils to dissolve into the food.  With every bite, the well-to-do diner was getting a mouthful of poison.  The poor ate with wooden spoons, or dipped their food up with bread, and suffered not at all.

Enjoy the splashing tomatoes that form an interesting pattern in this jigsaw puzzle!

See all jigsaw puzzles based on Salman Al-Salman's photographs.