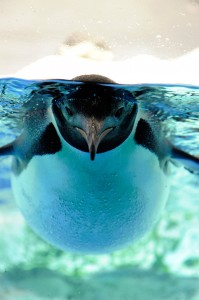 Who does not love a little bird that wears a tuxedo?   Penguins are cute, lovable birds that do not fly but swim instead, as demonstrated in this jigsaw puzzle.  Instead of wings like most birds, these little creatures have developed flippers. Because of their special biological makeup, they can stand cold and icy waters while they swim and hunt fish to eat.   Their food of choice is fish, squid, krill and other sea animals they catch while swimming underwater.

There are actually only a small number penguins found in the Antarctica, most live farther north in more moderate temperatures in cold climates.  There are several species of penguin from smallest, the Little Blue Penguin to the largest, Emperor penguin.

See all jigsaw puzzles based on Bong Grit's photographs.