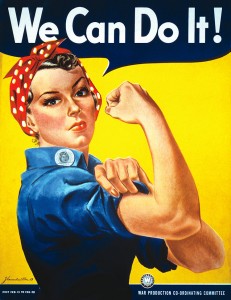 The “We Can Do It!” poster is probably the best known World War II poster, although it was not widely distributed at the time of its printing in 1942.  The poster was used to aid in the recruiting of women for factory jobs during the war. American factories were running at full capacity in an effort to produce the needed equipment and supplies for the war. Women were recruited to fill factory positions once considered “male only” positions because they were badly needed to replace the men who had gone to war.

The poster was designed by J. Howard Miller based on a news photo of 17 year old Geraldine Doyle, a factory worker in Lansing, Michigan. The poster first became popular in the 1970s and 80s and is often referred to as “Rosie the Riveter”. Geraldine Doyle was not aware that she was the model for the poster until 1984. She died December 26, 2010.