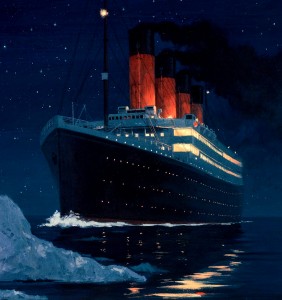 The RMS Titanic was the largest, most luxurious ship of its day. It set sail on its maiden voyage on April 10, 1912 from South Hampton, England bound for New York City. The ship carried 1,316 passengers and 900 crew members on that voyage.

At 11:40pm on April 14, 1912 the crew spotted an iceberg ahead and tried to steer the ship around it. But the danger had been spotted too late. The Titanic struck the iceberg on the starboard side and tore a series of holes in the hull. The passengers only felt a little vibration. However, it was quickly apparent to the crew the ship would eventually sink. The crew was not trained to manage an evacuation, and there were not nearly enough lifeboats for everyone. To make matters worse, many of the Titanic’s lifeboats were sent out only half full because the crew did not know how many people each lifeboat could safely hold. The lifeboats were loaded on a “women and children first” basis.

Two hours and forty minutes after the initial accident, water filling the Titanic’s bow caused its stern to rise out of the water and then snap from the bow. The ship submerged into the freezing ocean with most of the passengers, and all of the crew, still aboard. A total 1,517 people died. Those who did not drown immediately died of hypothermia within a few minutes of entering the water due to the water’s extreme cold. Only 13 people managed to swim to one of the lifeboats, which had room for many more people.

The Titanic’s crew had sent out wireless distress messages and had shot flares in the air in an attempt to summon help. Amazingly, the SS Californian was only a few miles away and could easily have come to the Titanic’s rescue. The SS Californian’s crew saw the flares and could even see the lights of the Titanic at an odd angle as the ship began listing. Yet the captain did not seem to comprehend what was happening and kept his ship in place (the SS Californian had lowered anchor due to the danger of icebergs which could not be easily seen at night).

The RMS Carpathia received the distress signals and arrived on the scene a few hours after the Titanic sank. The Carpathia rescued the 710 people in the lifeboats and took them to New York. Photo of the RMS Titanic just after it left port in South Hampton, England on April 10, 1912