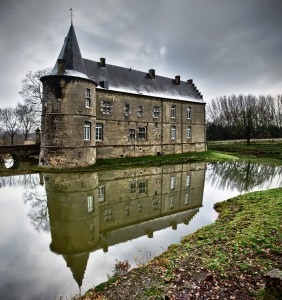 This jigsaw puzzle features Rivieren Castle, a moated Netherlands castle first built in the fourteenth century as a private home of the Tervieren family, though some have reported their name as Van Der Vyeren. It stands near the village of Voerendaal. The property has changed hands several times since then. The castle was redesigned by Casper Van Huyn with natural stone and an addition of twin towers in the 1500’s. In 1720 the brick gatehouse was added. The castle was extensively damaged during World War II and in later years it became a youth hostel. While the farm on the grounds is housing the castle’s private owner, the Rivieren Castle itself remains vacant.

See all jigsaw puzzles based on Bert K's photographs.