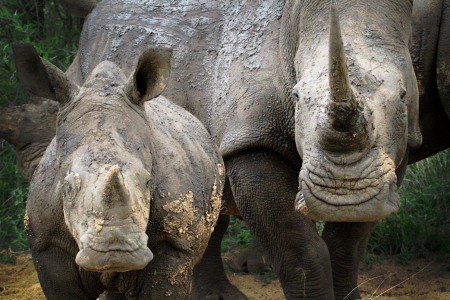 The rhinoceros, more commonly referred to as a rhino, is an animal that is native to Africa and southern Asia.  Characterized by its large size, its thick protective skin and its horn, the rhino has become an endangered species because of their valuable horns made of keratin. While the rhino has acute hearing, they have very poor eyesight which makes them an easy target for hunters and predators. The rhinos in this jigsaw puzzle are located in the Kruger National Park African safari tour. Because the animal is vulnerable to extinction, zoos and other locations are making an effort to save the rhino.

See all jigsaw puzzles based on Steve Evans's photographs.