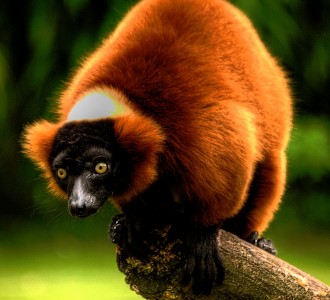 The Red Ruffed Lemur, shown in this jigsaw puzzle, is a mammal native to Madagascar, living in the rain forests of the island nation. Known for its long and bushy tail, this critically endangered primate takes care in grooming its thick fur. Its vegetarian diet consists of nectar, figs, fruit, seeds and various leaves, which grow in different seasons.

Social animals, packs of lemurs may be as large as 32 members. Families communicate through barks, with certain pitches alerting members to foraged fruit and other tones to ward off predators. Female lemurs average three young per litter, but may have as many as six, which is more than any other type of lemur.

See all jigsaw puzzles based on Stefan Insam's photographs.