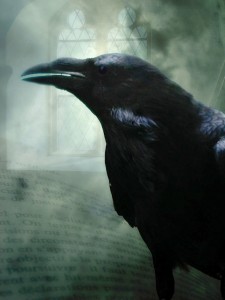 The raven is one of the most widespread and familiar of birds. Historically people considered it a nuisance because it habitually raided garbage. However, the species’ intelligence and complex behavior makes a fascinating study.

Raven plays a mythological role in many cultures. For example, the myths of Pacific Northwest indigenous people portray the raven as the creator. Other traditions viewed the character as a trickster or messenger.

Ravens have a wide range of vocalizations. They engage in playful activity such as mock fighting and tumbling during flight. The raven has earned a well-deserved reputation for cleverness. Some have recently been observed waiting for vultures to break ostrich eggs. Then they gang up on the larger, stronger birds and steal the food.

See all jigsaw puzzles based on Ian Burt's photographs.