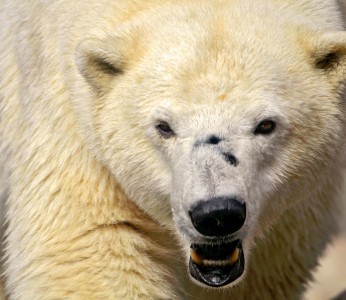 Behold, the largest land carnivore on the planet with males weighing in as much as 1,500 lbs. Evolving approximately 200,000 years ago from brown bears, polar bears thrive in Arctic areas due to their significant and numerous adaptations. The bear in this jigsaw puzzle is one of several in Aalborg Zoo where staff is committed to major nature conservation projects.

These cold weather hunters of the sea are equipped with large feet providing weight distribution on slippery ice and increased propulsion during swimming. The pads of their feet include small dermal bumps supplying the polar bear with more traction. Polar bears are highly resourceful at catching their prey, mainly consisting of seal and fish. They have also been studied engaging in imaginative play, further supporting scientific evidence that polar bears are highly intelligent.