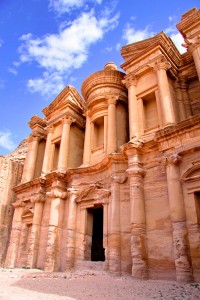 You may recognize Petra from the movie ‘Indiana Jones and the Last Crusade’. This spectacular site has been described as one of the places you must visit before you die. The settlement was built in around 6 BC as the capital city for a local tribe, the Nabataeans, although it remained virtually undiscovered until the early 19th century. The building shown in this jigsaw puzzle is called The Monastery. Petra also has various tombs, temples, and palaces all built in the local pink stone. Petra was declared a World Heritage Site in 1985 and there are ongoing efforts to restore and preserve it for future generations.

See all jigsaw puzzles based on Guillaume Baviere's photographs.