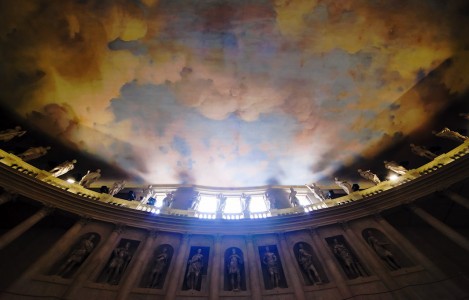 Description provided by the photographer:

The Teatro Olimpico (“Olympic Theatre”) is a theatre in Vicenza, northern Italy: constructed in 1580-1585, it is the oldest surviving enclosed theatre in the world. The theatre was the final design by the Italian Renaissance architect Andrea Palladio, Renaissance, and was not completed until after his death. The trompe-l’œil onstage scenery, designed by Vincenzo Scamozzi, to give the appearance of long streets receding to a distant horizon, was installed in 1585 for the very first performance held in the theatre, and is the oldest surviving stage set still in existence.

Since 1994, the Teatro Olimpico, together with other Palladian buildings in and around Vicenza, has been part of the UNESCO World Heritage Site “City of Vicenza and the Palladian Villas of the Veneto”.

See all jigsaw puzzles based on mari27454's photographs.