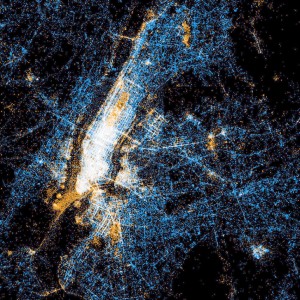 When all those points are displayed in aggregate you can clearly see the outline of Manhattan as well as its streets. One would hope all those dots along the streets represent people tweeting from the sidewalks, or while riding in a car, and not while driving! You can also identify tourist areas such as Central Park, the State of Liberty, and the Bronx Zoo shown predominately in orange representing the frequency of photos taken in those areas.

See all jigsaw puzzles based on Eric Fischer's photographs.