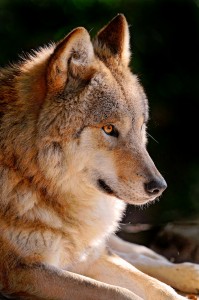 The Mongolian wolf in this jigsaw puzzle is a gray wolf found commonly in Europe and Asia. Other names include European or Common Wolf. The Mongolian wolf is distinct from other types of wolves for its slightly larger head, noticeably higher ears, and coarser fur. This wolf varies in size, with the larger ones found in Russia and Scandinavia. They feed mostly on wild game such as deer, although wolves of this species living near humans tend to feed on garbage and livestock such as cattle due to lack of other prey. The population of these wolves in Europe is less than 24,000.