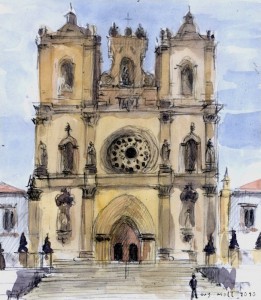 This jigsaw puzzle features a watercolor painting of the Alcobaça monastery façade, painted on location in Portugal. The monastery was founded in the 12th century in celebration of a notable victory over the Moors in nearby Santarem. Over the centuries, the monastery witnessed many dramatic events, including the 14th-century love affair between King Peter I and his mistress, whom he crowned posthumously.

The Cistercian monks created a center of learning at Alcobaça, offering the first public lessons to their flock in the late 13th century. They were also the first to produce an authoritative history of Portugal.

See all jigsaw puzzles based on Guy Moll's photographs.