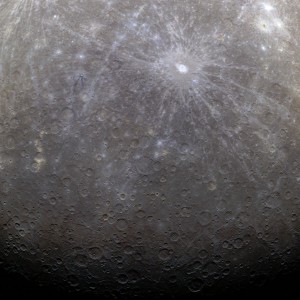 NASA’s Messenger is the first satellite to ever be put in orbit around the planet Mercury. The photo in this online jigsaw puzzle is the first image of Mercury recorded by Messenger. The image was recorded within days after Messenger successfully entered obit around Mercury and was publicly released by NASA on March 29, 2011. Data gathered by Messenger will be analyzed to help answer a number of puzzling questions scientists have about Mercury. The answers to those questions will also help scientists better understand the astronomical history of the three other inner planets, including Earth. More information about the Messenger mission can be found at NASA’s Messenger page.

Mercury is the closest planet to the sun and is about half the size of earth’s moon. In fact, Mercury’s appearance is very similar to the moon.