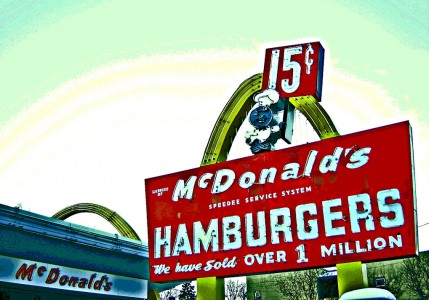 McDonald’s is the world’s largest hamburger fast food chain, with restaurants in about 120 countries in six continents. The McDonalds in this jigsaw puzzle was the first McDonalds opened under the McDonalds franchise name. The store is in Des Plaines, Illinois and was opened in 1955 by Ray Kroc.

Ray Kroc bought the rights to McDonald’s from the two McDonald brothers, Richard and Maurice, who had devised a means to serve customers quickly and their so-called ‘Speedee Service System’ was in many ways the forerunner of all fast food restaurants that followed. The familiar Ronald McDonald mascot was adopted in 1967. From its humble beginnings, the company now operates over 30,000 restaurants around the world and employs over 1.5 million people. An estimated 58 million people eat at McDonald’s every day.

See all jigsaw puzzles based on Mary Anne Enriquez's photographs.