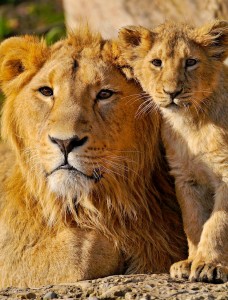 Stunning and majestic, the lion is one of the most admired animals in the world. Yet even this well-known animal harbors a few secrets. For example, few people know that a lion’s roar can be heard up to five miles away, or that males do not reach sexual maturity until they are 5 years old. The lion is also the most social member of the cat family, and members of the pride cooperate to protect their kills from vultures and hyenas. That is a big job, because each adult male requires about 15 pounds of meat a day, while feThe polar bear, with its stunning white coat, is the largest carnivore in the world. They live in the Arctic region and though they are born on land, they actually spend much of their time in the sea and on the ice, which explains their nickname, the sea bear. The favorite food of the polar bear is seals. The bear waits by a seal’s breathing hole in the ice and then catches the seal with its paw when it comes up for a breath. Although it has been state that this species is on the decline,  it is actually increasing in numbers. The state of Alaska states it is not a threatened species.males (who do most of the hunting) need only 11.

The lion in this jigsaw puzzle, with is kid brother, were photographed at the zoo of Zürich, Switzerland.