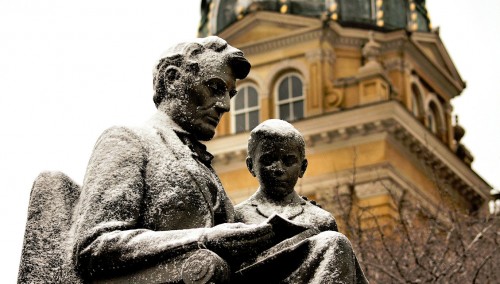 Abraham Lincoln is one of the most well-known and studied presidents in United States history. Born in 1809 in Hardin County, Kentucky, Lincoln’s career in law eventually took him to the presidency in 1860 after winning the Republican nomination. In his personal life, he and wife Mary Todd Lincoln had four sons with only one surviving into maturity. The statue in this jigsaw puzzle depicts Lincoln with his son Tad. Created and designed by husband and wife Fred and Mabel Torrey, the statue was initiated to mark the 150th anniversary of Lincoln’s birth date and sits on Iowa’s State Capital grounds.

See all jigsaw puzzles based on Phil Roeder's photographs.