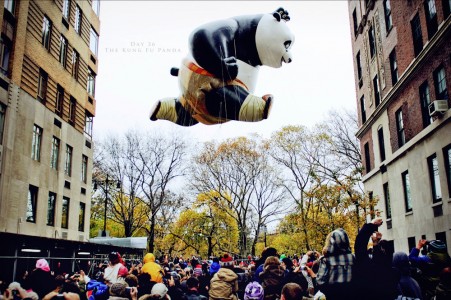 Po of Kung Fu Panda fame makes an appearance at the Macy’s Thanksgiving Day Parade in this jigsaw puzzle.

Balloon floats have been a part of this parade since its in inception.  The parade has run continuously since 1924 except for three years during World War II, when rubber and helium were needed for the war effort.

The image featured in this particular jigsaw puzzle was captured in 2010, Po’s first year in the parade.  Kung Fu Panda is in his favorite Kung Fu shorts and ready to take on the enemy to the delight of children and adults watching the parade.

See all jigsaw puzzles based on Allen Skyy's photographs.