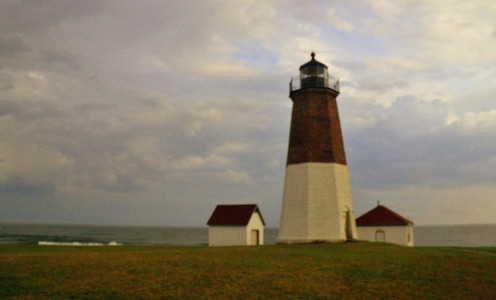 The lighthouse at Judith Point, pictured in this jigsaw puzzle, overlooks both the east entrance of Block Island Sound and the western entrance of the Narragansett Bay in Rhode Island. The current structure is the third of its kind, as the initial tower constructed in 1810 was destroyed by a hurricane. In 1816, this 35-foot tall lighthouse was replaced with a structure of similar height. The 1816 tower was again replaced in 1856, by the current building. This lighthouse was lit in the following year, and was automated 97 years later in 1954. To encourage maritime visibility, the Judith Point Light is painted in a brown and white two-tone scheme.

See all jigsaw puzzles based on Roger's photographs.