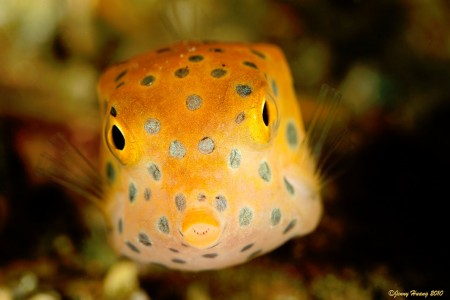 The boxfish seen in this jigsaw puzzle was photographed in Indonesia. The boxfish is a bony fish found in many oceans including those around Indonesia. These fish have a similar shape to the better-known puffer-fish, but their defense mechanism is slightly different. Instead of puffing up with dangerous spikes, the boxfish will actually secrete poison into the water when threatened. Additionally, as the fish mature, the scales become very hard and are almost impossible for other fish to eat. Interestingly, the younger the fish is, the brighter the colors. As they mature, the colors will fade and become more muted to better blend into the background.

See all jigsaw puzzles based on Jenny Huang's photographs.