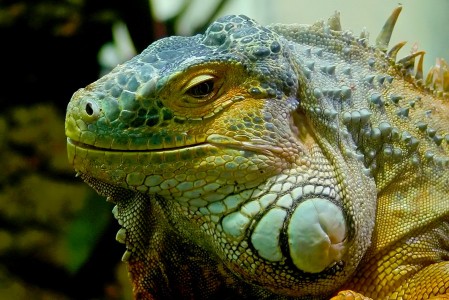 The lizard in this jigsaw puzzle is a Green Iguana, native to the rainforests of Central and South America. Commonly kept as pets, this egg-laying herbivore lives as long as 20 years, subsisting on leaves and fruits. If not in captivity, these lizards spend most of their existence in tree canopies and their surrounding water. The average size is more than six feet long, including tail, and weighing about 11 pounds.  Iguanas are both cold-blooded and egg laying with regular breeding seasons. Despite its slow appearance, an iguana can move fast on land, jump from tree limbs and swim well in water.

See all jigsaw puzzles based on Feichtnerc's photographs.