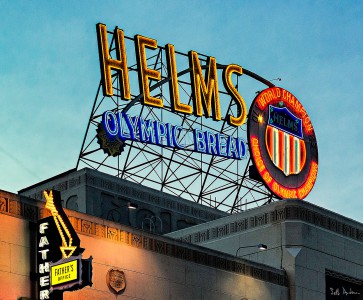 This sign is on the building of the former Helms Bakery in Culver City, California. Helms Bakery’s bread was well known even though it was never sold bread in stores. They operated from 1931 to 1969 by delivering fresh bread to customers’ doorsteps by truck. Helms Bakery was the official baker of the 1932 Olympic Games in Los Angeles. They provided bread for the athletes and became known as the bread of Olympic champions. The business closed when delivering bread directly to customers was no longer economical.

See all jigsaw puzzles based on Seth Anderson's photographs.