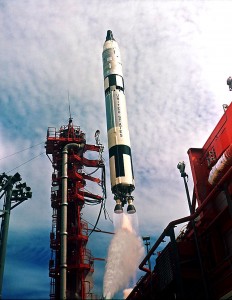 Project Gemini was NASA’s second human spaceflight program, the twelfth manned American flight. The purpose of the project was to improve advanced space travel techniques. The Gemini VIII rocket was, as shown in this jigsaw puzzle, launched in March 1966 and it achieved the first successful docking with another space vehicle. While docked, the Gemini suffered the first life threatening system failure in space when a thruster malfunctioned and caused a near fatal tumbling, which forced the crew to carry out the first emergency landing by a U.S. manned space mission. This spacecraft is now on display in Wapakoneta, Ohio at the Neil Armstrong Air and Space Museum.

See all jigsaw puzzles based on James Vaughan's photographs.