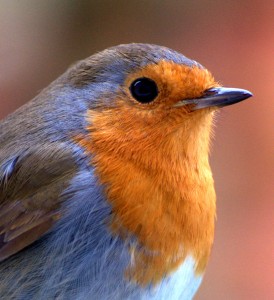 The Robin that is found throughout Europe, Russia, Africa and Asia is more properly referred to as Erithacus rubecula (or the European Robin). Although it shares a name with the American Robin, it is a distinct species; and though there is not a range of subspecies of European Robin, the Robins that live in England, eastern Europe and Asia are distinct enough to differentiate them into separate groups (though they are not technically classed as subspecies). The European Robin featured in this jigsaw puzzle was photographed near London.

The bird feeds on insects and, in Britain and Europe, is widely associated with the wintertime. The Robin’s image is often used on Christmas cards and decorations. However, despite its unassuming looks, the Robin is territorial and the male bird displays extremely aggressive behavior when confronted with other Robins and small birds within its territory. In fact, up to 10% of Robins die each year due to being attacked by another bird.

See all jigsaw puzzles based on Brian Fuller's photographs.