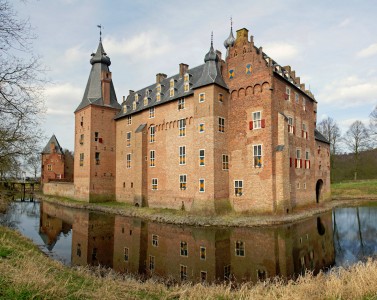 Doorwerth Castle is located in the Netherlands, near the city of Arnhem on the River Rhine. It was built partly for defense partly and for a local seat of power and administration. Parts of the structure date back to 1280, although it has been expanded over the centuries. Around the middle of the 17th century, a dike was constructed to protect the castle from flooding. Unfortunately, the castle was severely damaged during World War II by both German and Allied bombs. Since the end of World War II, there has been an ongoing restoration that has helped to preserve the castle and keep it for future generations. Queen Juliana opened Doorwerth Castle as a museum in 1986 and today, it attracts visitors from all over the world—many hoping to see the castle’s ghost, which was supposedly photographed in 2004.

See all jigsaw puzzles based on Bert Kaufmann's photographs.