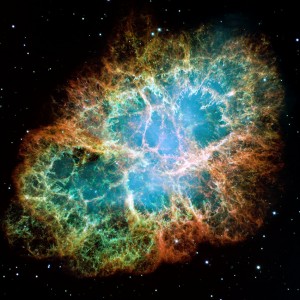 In 1054 AD astronomers in China and Japan recorded the appearance of a new star so bright it could seen easily during the day. Today we know that event was actually a star going supernova. A supernova occurs when a star runs out of the hydrogen that fuels the nuclear fusion reaction that keeps it stable. When the star’s hydrogen runs out the star collapses on itself and then explodes with tremendous force.

What remains of the 1054 AD supernova is the Crab Nebula, pictured in this jigsaw puzzle. The nebula is roughly 6500 light years away and has a spinning neutron star at its center named the Crab Pulsar. The nebula’s image was captured by the Hubble Space Telescope.