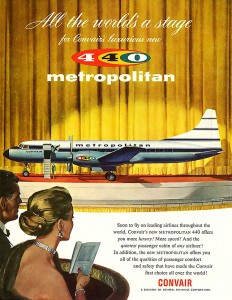 The original airplane built and flown in mid 1946 was a grand step up from the usual Douglass DC-3 that it was built to replace. By the mid fifties, American Airlines had revised the CV-240 several times, adding additional seats to bring the total passenger capacity up to 52, thereby giving birth to the Convair 440 Metropolitan. As depicted in the 1955 ad shown in this jigsaw puzzle, it was state of the art, equipped with improved soundproofing and was one of the fastest airplanes being flown at the time. In fact, it was so ahead of its time that it even had an option for weather radar.

See all jigsaw puzzles based on James Vaughan's photographs.