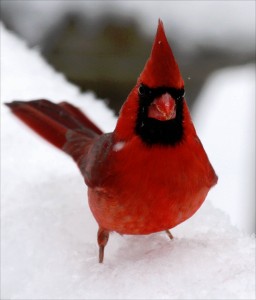 The beautiful scarlet cardinal is a robust little bird with a strong beak for breaking seeds.  They are found in the northern and southern Americas.  There is a distinctive difference in the male and female, where the male is a bright red, as shown in this jigsaw puzzle, and the female are brown with a little reddish tint.  Cardinals can usually be seen as a pair, male and female.    A generic name for them is Tropical Buntings although not all have tropical habitats.   Because of their rather large beaks, they also are considered Cardinal-Grosbeaks.  Because of their distinct color, the Cardinal is a favorite among bird watchers.

See all jigsaw puzzles based on Dawn Huczek's photographs.