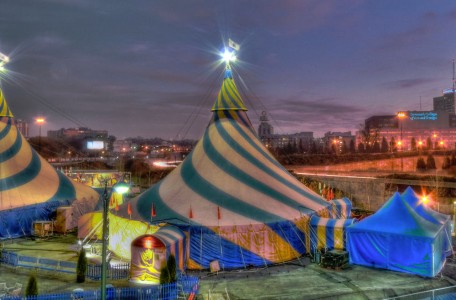 The colorful tents of the Cirque du Soleil (or Circus of the Sun) shown in this jigsaw puzzle stand against the backdrop of a blazing sunrise in Atlanta, during one of the troupe’s Big Top touring performances. Famous for its mixture of acrobatics, whimsy, storytelling, and ultra-modern showmanship, the Cirque du Soleil began its existence in 1984 in Canada, near the city of Quebec, as a small regional circus group. Today, its headquarters are in Montreal, but its reach encompasses the entire world, with permanent and seasonal shows in Tokyo, Macau, Las Vegas, Walt Disney World, Los Angeles, and New York, and touring shows in the Americas, Europe and Asia.

See all jigsaw puzzles based on Joiseyshowaa's photographs.