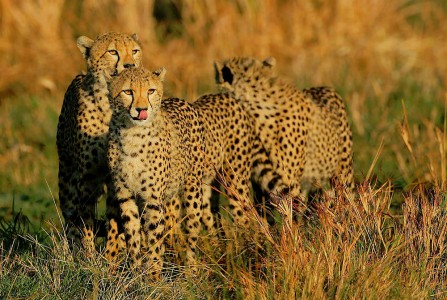 This jigsaw puzzle shows three cheetahs picking up the scent of their next meal. The cheetah is the fastest land mammal known, with the ability to run seventy to seventy-five miles per hour. They can get from a standing position to sixty-four miles per hour in three seconds. Although they are fast, Cheetahs are not good climbers, and this is why they generally live in low lands as opposed to mountainous areas. Their natural habitat is in Africa out on the open plains and savannahs

Cheetahs are shy animals and the mother is very devoted to her young, having litters of two to four cubs with each birth. These animals are mainly meat eaters and generally have a lifespan of ten to twelve years.

See all jigsaw puzzles based on Steve Garvie's photographs.