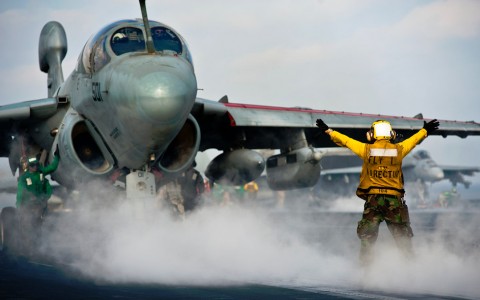 An EA-6B Prowler is being directed by a sailor on the flight deck of the Nimitz-class aircraft carrier USS John C. Stennis. The Prowler is an electronic warfare aircraft used to jam enemy radar and intercept electronic communications. The photo was taken on January 14, 2012 as the Stennis was sailing in the Arabian Sea. The Stennis made news a week earlier when it rescued the 13 member crew of an Iranian fishing vessel that had been taken over by pirates.

See all jigsaw puzzles based on U.S. Navy Imagery's photographs.