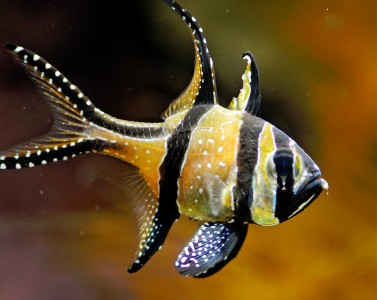 The Cardinal fish is a small unusual fish due to its two dorsal fins, as shown in this jigsaw puzzle. Cardinal fish live amongst reefs in shallow tropical or subtropical waters. Their average size ranges from around two to eight inches in length.

There are approximately two hundred species of Cardinal fish around the world and they can be found in the Atlantic, Pacific and Indian oceans. Cardinal fish are nocturnal so they are rarely seen as they spend their time in dark or shady places during the day.

They are an inexpensive and hardy fish making them popular for saltwater aquariums.