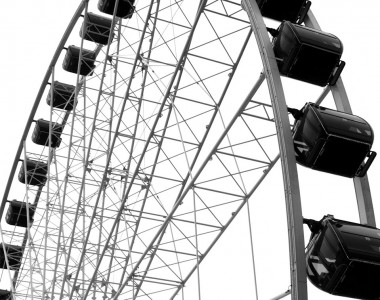 Ferris wheels are an attraction you can find throughout the world.  The ferris wheel in this jigsaw puzzle is located in Lyon, France. These magical wheels are a unique and romantic way to get a bird’s eye view of the landscape around you.  Many world cities have huge versions just so tourist can view the cityscape from above.

George Washington Gale Ferris, Jr. invented the Ferris wheel for the 1893 World’s Columbian Exposition in Chicago.  There have been previous inventions that have been very similar to this one.  One of which, was called a pleasure wheel and is rumored to have originated in Bulgaria.  Somers’ Wheel was another early rendition that was used in Atlantic City as well as Coney Island.

See all jigsaw puzzles based on Larue's photographs.