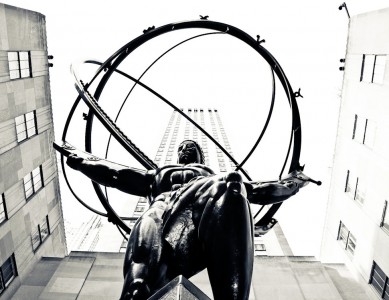 One of the most well known collections of buildings in New York, the Rockefeller Center was the brainchild of John D. Rockefeller and at the time was the largest architectural project of its kind. Right from the beginning, art featured prominently and one of the most famous pieces today is the bronze statue of Atlas, one of the legendary Greek Titans. The sculpture was designed by Lee Lawrie in 1937 and is as high as a four story building. At the time of its unveiling, it caused some controversy as more than one critic thought it looked too much like the Italian dictator Mussolini.

See all jigsaw puzzles based on Jorge Quinteros's photographs.